Rod Serling-Planet of the Apes, 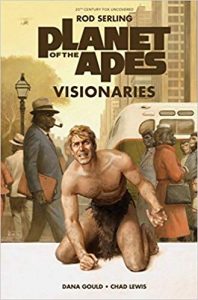 Until I read Rod Serling- Planet of the Apes Visionaries, I thought I’d learned everything I needed to know about, the movie, Planet of the Apes until I came across this Graphic Novel.  Somehow, I missed the fact that the original manuscript was written by Rod Serling, but then I was 17 at the time and was more into comic books than what was going on in Hollywood.

The artwork in this book is superb. Because it tells the story as much as the captions and dialog especially the pages that had little or no dialog or captions.

Rod Serling’s original vision of Planet of the Apes was a society that was somewhat normal. They dressed in suits, drove cars, worked in office buildings and did those things that day to day citizens always did–they were just apes instead. Hollywood took Serling’s story and turned it into what we all watched with Charlton Heston and the ensemble cast of humans in ape suits. I doubt Mr. Serling was pleased.

The Story by Rod Serling Begins:

Serling’s vision starts with a space mission; four astronauts preparing for hibernation stasis to cross the

vast distance to their target. As one would expect, after they go into stasis something goes amiss. Because the guidance system deviates and when they wake from their slumber the astronauts discover they are not in space. One astronaut did not survive due to damage to the pod. The ship, therefore automatically landed at night with no idea where they are..

Getting into the tractor they drive it into the wooded area near them to explore. A coconut crashes through the dome of their vehicle. Did it accidently fall from the trees or was it thrown? Making matters worse they drive it into a quicksand pool and must abandon their craft that sinks quickly below the surface.

The three astronauts are met by a band of primitive humans. Curious and friendly they don’t like the men’s uniforms or their smell. Therefore to show good faith the astronauts remove the top half of their garments.

Across the blue sky come flying machines that the astronauts recognize as helicopters. Jeeps loaded with apes in military uniforms chase the retreating humans; firing their weapons into the hoard. The skipper, Johnny, is attacked and hit in the throat before he falls.

The humans that have not been slain are gathered up and thrown into what looks like a paddy wagon. Johnny is found still alive and one ape soldier asks if he should put him out of his misery.

Saved from a quick execution, Johnny is taken to where surgery can be performed on his throat.

Days later, Johnny still can’t talk but he has shown signs of intelligence. It intrigues the Doctor.

Pointing to his throat while trying to talk the Doctor mistakenly believes Johnny wants something to eat and is offered some sugar cubes. Refusing the sugar the Doctor offers it to another human. Frustrated, Johnny claws at his bandages and writes a bloody message on his wall, “I can speak.” But it goes unnoticed because a hose used to stop a riot washes away the words.

Johnny is better but still cannot talk. The Doctor pays a visit escorted by a huge orderly. Johnny spots a pen in the Doctor’s pocket and lunges to get it. He is beaten back by the orderly and is clubbed unconscious.

Days pass and Johnny  has only showed what the Apes believe is the norm from all humans. Johnny’s arrogance is not appreciated by Dr. Zaius.

Taken to the exercise yard Johnny is free to roam around the compound. Spotting an open food 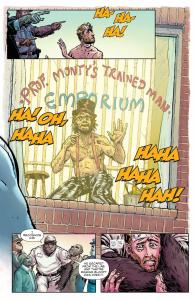 truck he sees his chance to escape by hiding under the vegetables.

The truck unsearched at the gate, he takes a chance to peek out from under cover and is amazed at what he sees. Before him is a normal cityscape replete with the usual: buildings, a movie theater, shops, apes in normal street clothes; window shopping or driving a car.

Meanwhile, Dr. Zira is checking her notes on Johnny. His responses are higher than any other subject tested, but her colleagues are of a different mind.

Fleeing the food truck Johnny jumps out into the street and is immediately tackled by a police officer. He is jeered by the gathering mob who then begin to laugh out loud; mistaking him for Prof. Monty’s Trained Man. An ape dressed in white recognizes him as the one who escaped from the lab and there is all hell to pay.

Back to the Cell:

Dr. Zira is determined to give Johnny some additional perception tests. A clipboard is accidentally dropped into Johnny’s cell. Snatching it up he quickly begins to write…

Because this is hard to believe, but another that was captured could corroborate his story.

Zaius takes Johnny to the surgery, strapped down to a gurney. Zira runs to the lab.

Struggling, Johnny manages to free his feet and kick over a tray of surgical instruments therefore evoking a loud clang. For the first time Johnny is able to utter words “Leave Me Alone.” A far cry from Heston’s, “Get your paws of me, you damned, dirty apes.”

Johnny’s placed in an auditorium because they want to make him a spectacle. The apes therefore refuse to believe he is no more than a trained animal–even humans would scoff in the face of this overwhelming truth.

Because he’s allowed to return to where his ship was left Johnny learns they had actually landed back on Earth, thousands of years later.

Will he be able to prove something had gone terribly wrong during the journey in space that caused a retrograde evolution of humans while the apes went forward.

It won’t end well. What happened and what is Johnny’s fate you’ll have to purchase the book.

Get your copy from Amazon. Only offered in a printed hardbound book or on kindle.

1 thought on “Rod Serling-Planet of the Apes Visionaries”