Suspense in a Dark Room:

Pet Shop owner, Otto Dengler awoke slowly in the dark.  He sensed first the uncomfortable chill of the air, then the pasty taste of his mouth.  He reached for the blanket to cover his naked body but couldn’t find it.  Stiff and sore from the cold, the mattress felt unusually hard; in fact, he could swear he was laying on a bed full of crumbs.  He didn’t recall eating anything in bed; he never did that.

Rising to another level of consciousness he sat up.  His back prickled all over; his buttocks felt like he’d sat on crushed glass.  Startled, he flipped over to his hands and knees.  While his senses warmed up from their stupor he became aware he’d been laying on gravel.  A handful rubbed between the fingers was flung to the side.

He stood gingerly; his bare feet reacting harshly to the uneven, shifting surface.  Before he was fully erect his head contacted something hard.  Where was he?  Certainly not his room.  How did he get here?  Reaching slowly above his head his hands found the object, a round wooden beam of roughly eight inches in diameter of unknown length.

Shivering in the gloom he wrapped his arms about himself; rubbing his flesh to promote some modicum of warmth.  Fully awake his olfactory sense kicked in.  The smell of avian feces stormed his nasal tissue like a thick cloud.  He knew the smell all too well: he’d been a pet shop owner way too long.

Using the rough beam for a guide he walked slowly to find it’s origin.  The only sound being the unsettling crunch of gravel beneath his tender feet, but more so, the increased pounding of his heart in his ears.

His fifth step ended in a slime covered ankle deep container of water.  Revulsed by an intensified blast of feces he jerked his foot back; shaking it spasmodically to rid himself of the muck.

Stooping to finish the job he found among the slime on his foot… feathers, downy feathers.

Unable to continue, he reversed his direction.  After a dozen carefully placed steps his feet contacted another texture; smoother, less angular.  He knelt to ascertain what he’d stepped on.  Lifting a handful, unable to see what the substance could be his nose confirmed it was… birdseed?

Continuing on, muttering nonsensical, he came to the beams end in a few paces.  The beam was attached to… bars?  Bars placed roughly eight inches apart.  The bars for a guide he walked tentatively to the side.  They seemed in a circular pattern.  When the smell of damp feces and feathers grew stronger he knew he must be approaching the pool he’d recently stepped into.  Not wishing to repeat the slimy footbath he retraced his steps till he found the overhead beam again.

Reaching through the bars his hand contacted fabric; fabric hanging from some yet unknown support, dense fabric one might hang at the windows to block out unwanted light.

The best he could figure, he was locked in some kind of cell or kennel meant for God knows what.  Leaning back against the bars he rubbed his hands briskly upon his flesh in a futile attempt to ward off the chill and intensifying shivers.  The area so dark there was no light to adjust to he could not be sure he wasn’t blind.  Hunkered down to preserve warmth — shivering violently he yelled into the nothingness.

“Hey!” was what he meant to say but all he heard was an unintelligible screech.  Startled, he yelled again with the same results.  The same screeching he’d grown to detest in his daily life.  Gently clutching his throat he attempted to articulate, but all that emerged were a hodge podge of cheeps, chirps and trills.

Hunger and thirst beset him — his rumbling stomach gnawed at his innards; his parched throat scratching inside his craw.  He thought of the pool across the way then quickly discarded the thought; no way he was ready for that.

Confused, scared, hungry, thirsty and cold; his sensibilities snapped.  Leaping to his feet he grabbed the bars tightly; shaking them violently while stamping both feet at once, screeching as loud as his unholy voice would allow.  Seconds later brought results.

A Dimness From Below:

A glow from below the cage got his attention while continuing his tantrum.  He could make out the lower limits of the drape around the bars.  Below that in the distance, a dirty, well worn, grey vinyl tile floor.  A heartbeat later the drape lifted rapidly upward; bright light flooding his eyes he pulled in his head, ranting all the more.

“WHAT THE HELL’S YOUR PROBLEM!” boomed a voice from above.

Startled, Otto leaped back a few paces.  Raising his gaze; out of the blinding light loomed the head of an angry bald eagle at least 50 feet tall.  Otto back-pedaled in fright, stumbling backwards into the slimy pool; his head becoming immersed. Rising quickly, he spasmodically coughed up globs of slime and feathers, his stomach in a reflexive retch, he cringed.

A huge taloned, claw foot crashed into the cage behind him, thrusting him out of the pool onto the gravel bottomed cage.

“SHUT THE HELL UP OR I’LL WRING YOUR FUCKING NECK!”

It Was All a Dream… or Was It?

Otto sat bolt upright in his darkened bedroom.  Sweating profusely, his legs twisted among the bed clothes, he sucked air in short breaths.  It took several seconds before his startled brain began to assimilate the facts.

Not fully awake he staggered into the bathroom to splash some cold water on his head and face.

Yes, Otto was a pet shop owner and over time he began to hate the business. So many new laws on the importing of exotic birds, of reptiles, and puppy mill dogs; every new restriction ate into his profits, making him madder still each time.

Soon, he began abusing the animals; telling them to SHUT UP, or rattling their cages; even going so far as to smack a puppy when it whined because it was hungry.

He tried selling the business many times but could never find some sap to take it off his hands, and giving the animals away to good homes was out of the question. There wasn’t any money in that. 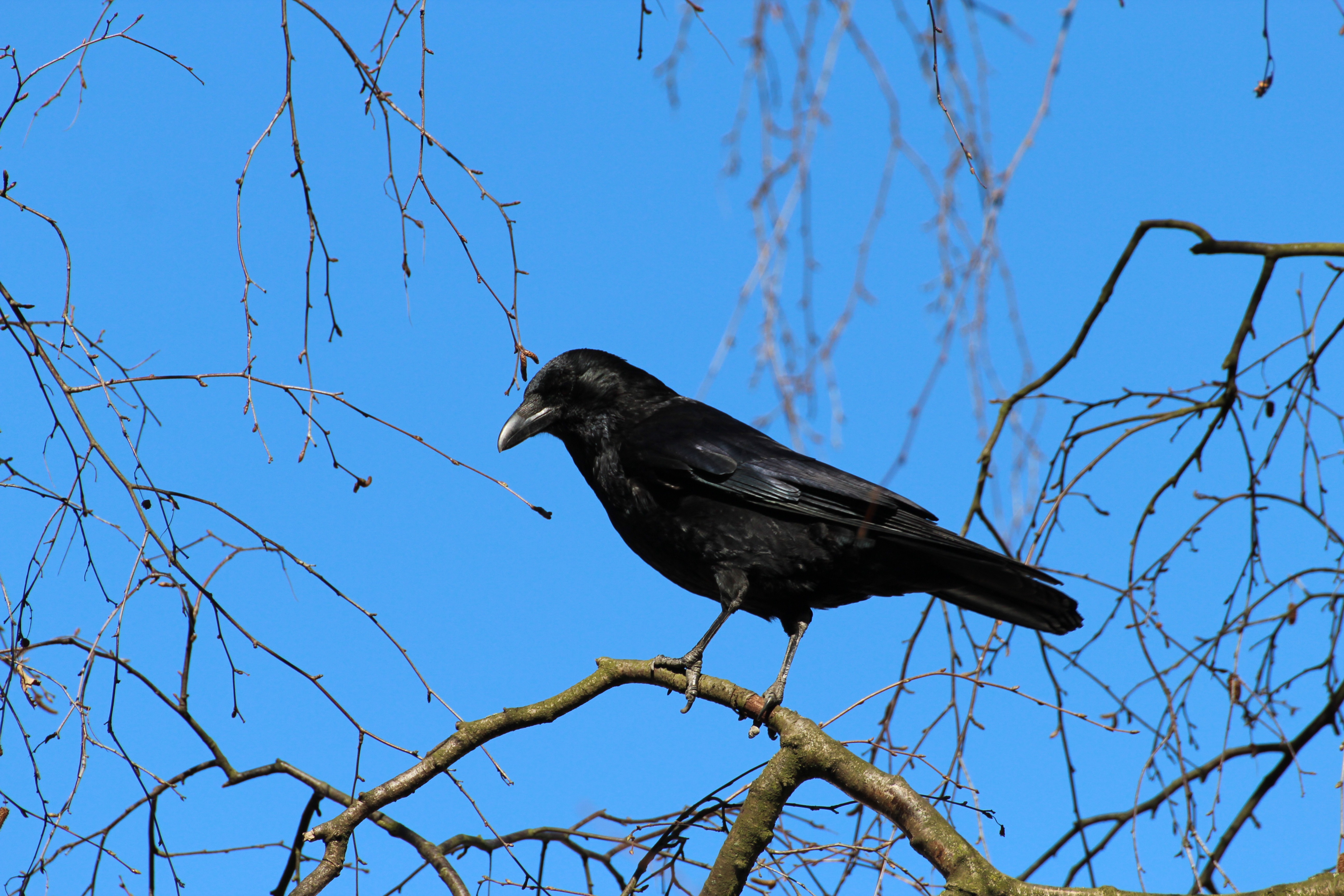 Lately, a Raven began showing up at the entrance to his shop and somehow it gave Otto an uneasy feeling. The raven even had an effect on the animals that spotted it hanging around his shop window. Chasing the big bird was an exercise in futility. It just flew out of his reach and returned when the coast was clear.

Refreshed, Otto took his time dressing; he was in no hurry to rush down to the shop. They’d all be wanting fresh food and water, and clean cages; another duty that drove him to distraction.

Upon leaving his bedroom, Otto gasped in abject horror.

Instead of entering the familiar confines of his kitchen, Otto was greeted with the same: filthy, smelly, unkempt birdcage from his nightmare of the previous night.

When the same giant eagle caught sight of him outside his little home it immediately went to the cage and began smacking it around. So violent was the rattling of the cage, Otto could not remain on his feet. Barely able to crawl back into the little confines of his bedroom, Otto hid in a closet where the eagle could not see him. Soon the violent rattling subsided and all was quiet for a while.

His mind reeling, trying to understand what the hell was happening, Otto tentatively stuck his nose out from his hiding place. Then abruptly, the silence was broken by a gruff voice.

Mustering up what little courage he really had, Otto made his way to the doorway and nearly had a heart attack right on the spot.

Sitting on a perch outside his cage sat the huge, black, raven looking in through the cage bars.

Quoth the raven, “Life’s a bitch when the shoe’s on the other foot, ain’t it.”

Let me know what you think of this story. Did you like it? Did you not like it and why? What do you think would have made it better?

Helpful comments will be taken graciously. Insulting comments or ones that just trash the story for no reason will not see the light of day.

Another short story by VJ Miller, Sr- To Get Her Together